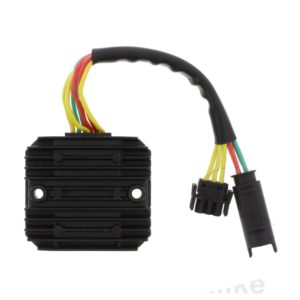 What is a Regulator/Rectifier

A Motorcycle Voltage Rectifier Regulator gives your bike the electrical current it needs to meet demand, at the right voltage.

Motorcycles are usually equipped with permanent magnet AC generators. The magnitude of the voltage produced by these generators depends upon the RPM of the engine. Despite these generators are specifically designed to produce about 13-15VAC at high RPMs, they do require a voltage regulator to provide a safe voltage for battery charging and for the electrical system. These generators could have single-phase or a three-phase winding. No matter the winding is single-phase or three-phase; all voltage regulator units have two parts i.e. Rectifier Section and Voltage Regulator Section.

The motorcycle regulator rectifier is part of the battery charging system and also called a motorcycle voltage regulator. The component usually gets an AC power feed from the stator coil of the generator (alternator).

Why are there two different systems? Three phase is more efficient and single phase are cheaper to produce.

There are two main types of alternator that are fitted to most motorcycles, each requiring a different type of voltage regulator rectifier.

1) Permanent Magnet Rotor alternator (PMR) – This has permanent magnets that revolve with the engine (rotor), either inside or around a set of wound coils (stator) to produce power. These come in various shapes and sizes. Some have two output wires (single phase), but most have three (three phase).

2) Field Control Type (FCT) – This has a ‘field’ or ‘exciter’ coil that is in place of the fixed magnets. When supplied with power from the regulator this becomes magnetised. Some types have this coil spinning inside the output ‘phase’ coils to give power, and will have carbon brush connections. Others have a stationary field coil, stationary phase coils and have a metal rotor spinning between the two, and need no brushes. The amount of power supplied to the field coil from the regulator decides how much output the alternator will give.

Are all regulators the same?

Some regulator rectifiers for example 1990s Ducatis use a ?sense? cable to detect system voltage. Others ? such as old Suzuki GS twins ? do it automatically, while some like Honda?s CB750/900F govern field coils that increase or reduce magnetism, and thus electrical output.

How to test the Regulator

Check the battery voltage, with the engine not running. Start the bike (increase the rpm’s up a little), the voltage should now be a couple of volts more than the original battery voltage. Check both voltages (running and not running) at battery terminals.

What can go wrong with a motorcycle voltage regulator?

Regulator rectifiers generally fail in older bikes as resistance builds up in the loom. You need to remember to check the alternator cables and connectors are healthy too.

If your regulator fails. Before going to the time and bother and expense of replacing one, it is a good idea to consider that there are usually contributory factors to a failure. You should conduct a thorough inspection of all other parts of the electrical system and check that all components are in good working order. Also make sure that the regulator is correctly mounted to allow dissipation of heat. You could also perform some basic post-mortem checks on the regulator/rectifier itself, and attempt to determine what has failed, internally if you have the necessary test equipment.

How to Test Your Motorcycle Charging System

We have a handy PDF download on How to Test Your Motorcycle Charging System and help you find your charging system fault. This information should help you to decide whether you need to replace the regulator or even the battery or stator or any other electrical components on your motorcycle.

Total failure does not usually mean that every part inside the unit died at the same time. All of the parts share a common ground or hot connection; if the unit tests out totally dead, then this internal connection could have failed. This is typically due to either a manufacturing defect, overheating or metal fatigue from too many heating and cooling cycles.

Failed diodes will stop your battery from charging. The lights become progressively more dim, and eventually the engine will stop. First look for a short or bad connection to the alternator stator coils. A bad connection can cause some serious voltage spikes, which can destroy diodes. Check also for a bad battery connection and any oxide build up on the terminals and connectors. A shorted battery or reversed terminals could cause the diodes to draw too much current and burn out. These symptoms could also point to stator failure . Check the coil resistances and or output voltage if your meter has an AC range, to eliminate this.

A Shunt Regulator is a small electronic component that clamps a power supply voltage at a fixed level. If this fails, your headlight may become very bright and the lamp might blow. Your battery may have boiled dry also.

If the regulator burned out, check your battery connections. If they are loose or corroded the regulator has nowhere to route the output. The regulator gets rid of the power produced in the form of heat. Also, make sure that all of your running lights are working; remember, the regulator sinks excess power, and generates a lot of heat in the process. If all of the lights aren’t working, that’s more heat for the regulator to get rid of.

We can also supply Stators and Generators for your motorcycle

If you cannot find your part please call us and we will find it for you.

Motorcycle parts store has a wide range of replacement parts for the electric components of your bike.

We will email you when the product is back in stock.